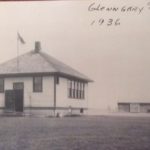 Established in 2021 through an endowment by Claire Kramer, the Glengarry Book Award is a $20,000 (CAD) prize awarded for the first edition of an English novel or book of short fiction.

The Glengarry Book Award is inspired by and contributes to the province of Saskatchewan’s rich literary culture. It is open to established professional writers of fiction with a significant body of published work, recognition and awards. Authors must describe their connection to Saskatchewan (e.g., whether born in the province, currently living there, or developed a career while residing there) and be a Canadian citizen or permanent resident.

Born and raised in Saskatchewan, Claire Kramer is a patron and supporter of the arts, a booklover and founding trustee of the Saskatchewan Foundation For the Arts. The Glengarry Book Award was established in recognition of one-room schools, and the role they played in the early education of those who would shape the future of this vast land.

In announcing the establishment of the Glengarry Book Award, Claire stated: “Saskatchewan has a history of producing renowned writers who have made significant contributions to literature in Canada. I am delighted to establish this annual award in support of literary excellence from or influenced by living in our province.”

Find out more about Claire Kramer’s role in the origin of the Saskatchewan Foundation For the Arts.

Request a Call Back